The 2021 eChallengeCoin is available on my Tindie store!

If you already have the 2021 eChallengeCoin (or not) and want to read the story, Sara and The Brewer's Bible is now available online. 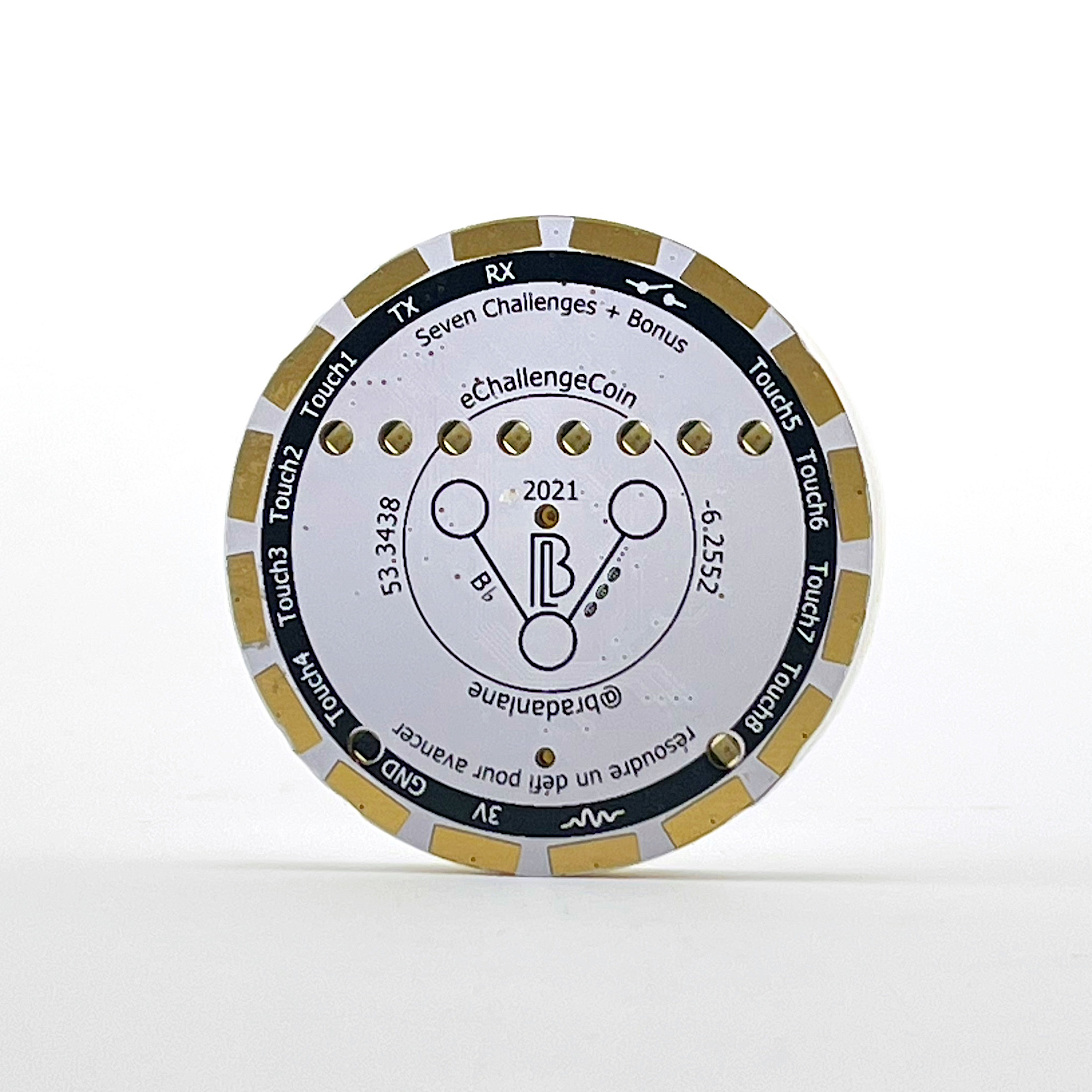 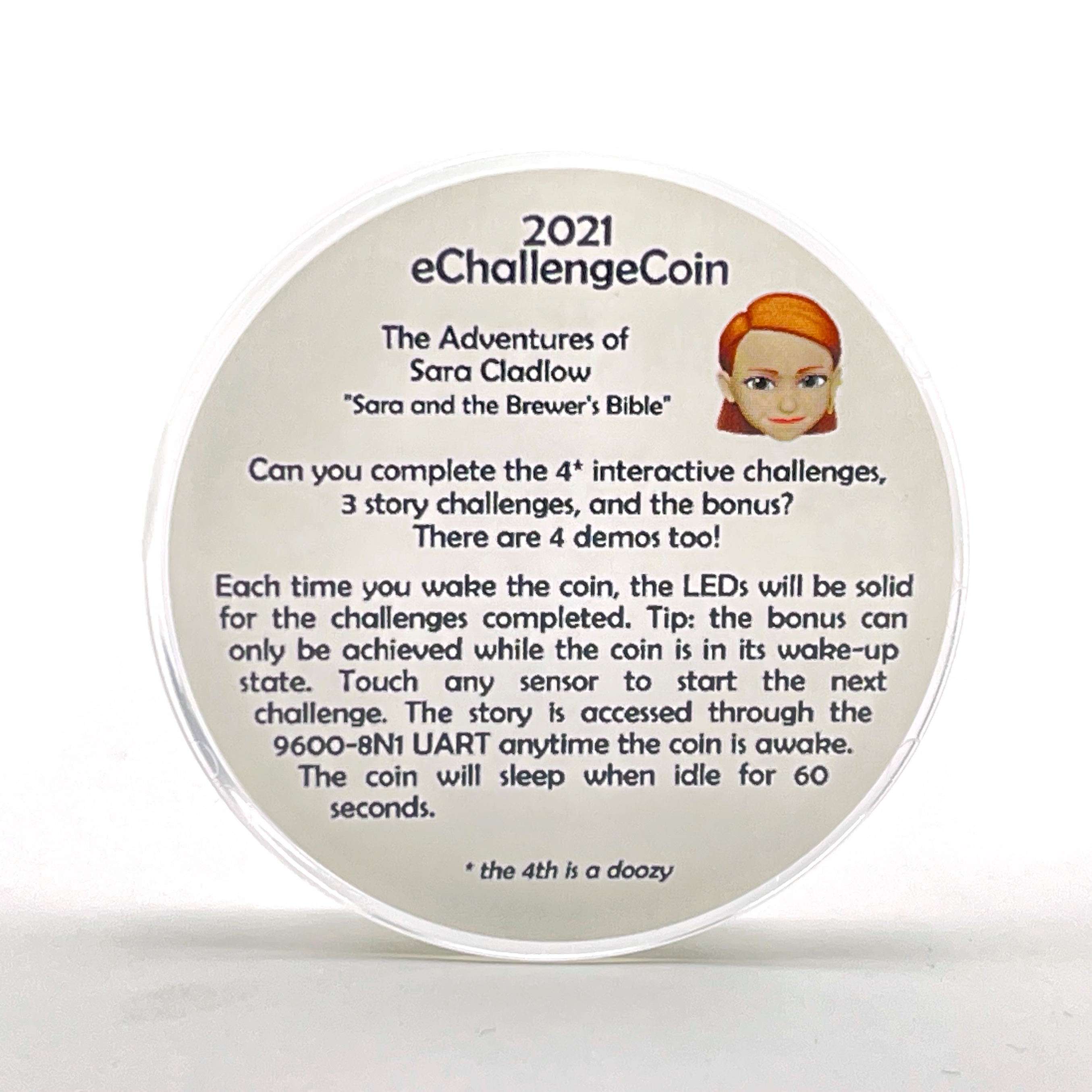 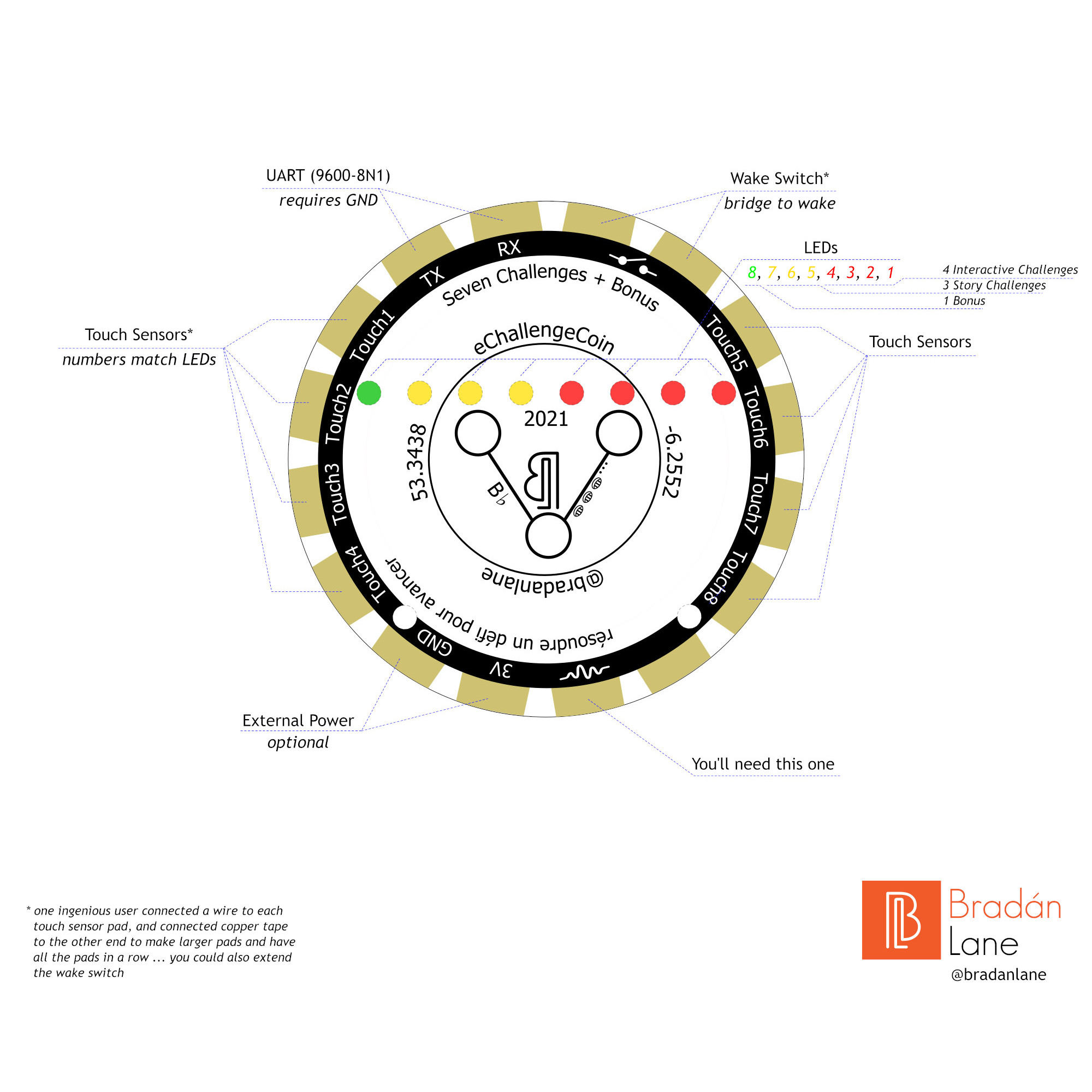 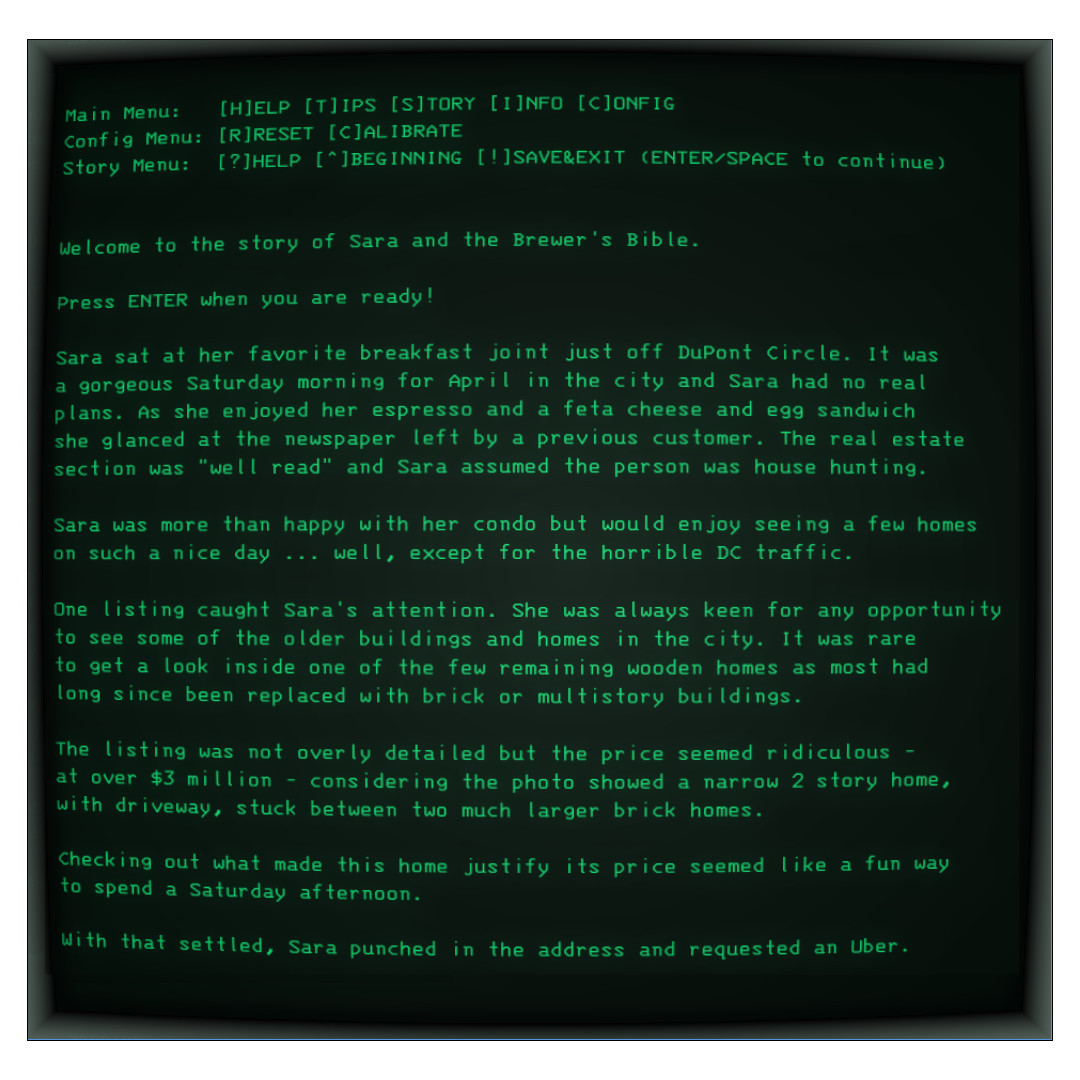 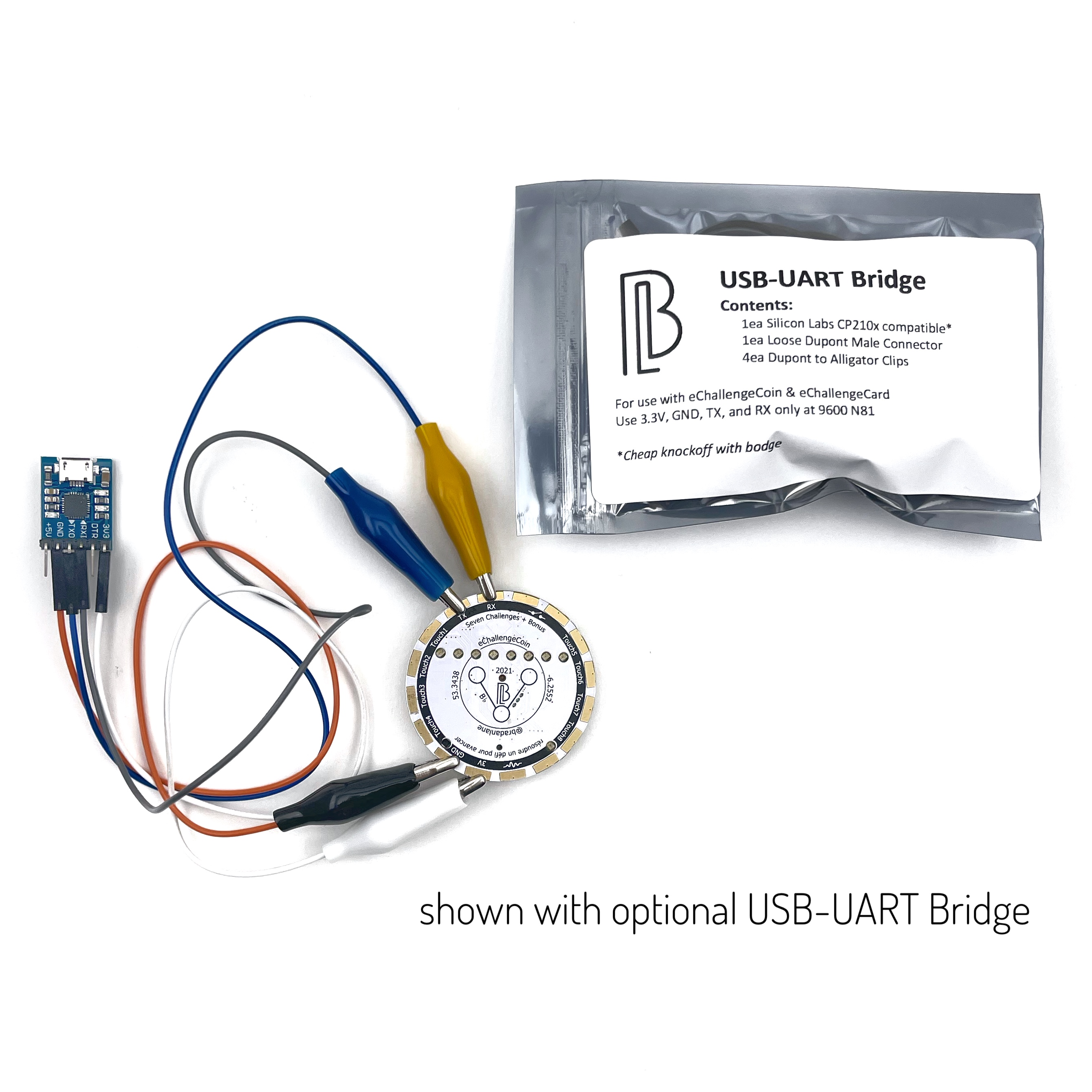 The new eChallengeCoin has eight touch sensors and eight LEDs. This makes for new challenges. The new puzzle also has a buzzer. The buzzer is not very loud - especially being covered - but it's there and is significant. The IR transceiver has been improved which makes the bonus more reliable. Hackers will even find breakout test points on the PCB for the IR transceiver, but they are not strictly required..

The eight touch sensors and eight LEDs means the 2021 puzzle has 4 interactive challenges. They progress in difficulty and weirdness so don't get mad, get busy! Some old school creativity is warranted.

The eight touch sensors also means there are now four demos. The touch demo is back and now can be used to play music! The SIMON game is back too. The blinking LEDs has been updated to animations. There is even a random number generator so you can use the eChallengeCoin in place of a one to eight sided die.

The 2021 eChallengeCoin is only 44mm in diameter and is a little over 6mm thick. There are 16 contact pads around the perimeter which means they are small - only 5mm * 2mm. The UART uses the TX, RX, and GND pads. It is set for 9600-8N1. It only outputs line-feed so you may need to configured your terminal to add the carriage-return. The puzzle may be powered using the 3V and GND pads. It will tolerate up to 3.3V.

Some of the interactive puzzles have a long clue. If you already know the clue and just want to skip to providing the answer, you may use the wake pads as previously described or you may touch all of the touch sensors together. You will know the eChallengeCoin has detected this when all of the LEDs are illuminated. Once you release all of the touch pads, the LEDs will go out and the eChallengeCoin will be ready for you to answer the clue.

When the eChallengeCoin wakes, it will show the current status. The status includes which interactive challenges have been solved, which story challenges have been solved, and if the bonus has been achieved. A solid LED means a challenge is completed and the next challenge is shown with a blinking LED. Touching any sensor will leave status mode and begin the next unfinished challenge. The eChallengeCoin will go to sleep after a challenge has been completed or failed. It will also go to sleep if idle for 60 seconds. The idle time is extended to 5 minutes when in story mode.

The interactive challenges use a combination of the touch sensors, the LEDs, and the new buzzer. The layout of the LEDs are from right to left - the right most LED can be thought of as #1 and the left most LED as #8. The touch sensors are labeled with 1..4 on the left and 5..8 on the right.

The eChallengeCoin has another story from the series the Adventures of Sara Cladlow. Within each story, you are tasked with solving the challenges Sara encounters. The story is accessed through the UART connection on the eChallengeCoin.


Game #1 Hint:
Treat the LEDs as numbers
Game #1 Clue:
Do you recognize a progression
Game #1 Spoiler:
The numbers are cubes as a sequence '1, 8, 27, 64, 125, 216, 343' so the next number is 512 and you enter it one touch sensor at a time '5 1 2'
Game #2 Hint:
This song is from a band who's original name was legally challenged so they shortened it
Game #2 Clue:
there is a clue on the RFID suggesting that 'to' could be replaced with 'two'
Game #2 Spoiler:
The song is '25 or 6 to 4' by Chicago and when you take the digits you have the number '25624' which you enter with the touch sensors one digit at a time '2 5 6 2 4'
Game #3 Hint:
The LEDs represent 8-bit ascii letters
Game #3 Clue:
The message uses a key cipher - the key is both hinted at on the RFID (What is in Terry Doolittle's trash) and on the face of the eChallengeCoin - but the message is missing a word
Game #3 Spoiler:
The message is 'Etps todmowz wpaemd vnhx bsam **** jy ts' and using the key 'BFLAT from the movie 'Jumpin Jack Flash' you end up with 'Does anybody really know what **** it is' which is another song by Chicago where the missing work is 'time'. Write down all the touch sensors for each letter. Touch a single sensor and then keep adding the others until all the touch sensors for a letter are active. Then release them all. Repeat for each letter.
Game #4 Hint:
The sound is familiar to anyone who has watched the movie WAR GAMES
Game #4 Clue:
Use the audio pad and GND as a microphone level input to the command 'minimodem --receive 300 --ascii' or its equivalent
Game #4 Spoiler:
The repeating message is 'How old was Alexander Graham Bell when he died' and the answer is '75' which you enter on the touch pads as individual numbers' 7 5'
Story #1 Hint:
Daniel Bussard is a real person and a lot of his details are on the internet
Story #1 Clue:
The place you are looking for is the church where Daniel Bussard was active
Story #1 Spoiler:
Daniel Bussard was a trustee at the Georgetown Presbyterian Church and the answer is 'presbyterian' and any extra words are ignored
Story #2 Hint:
Legal scholars will recognize the Latin
Story #2 Clue:
et ux is Latin for wife and often found on legal documents such as a deed
Story #2 Spoiler:
Daniel Bussard was married to Catherine who is listed on the house's deed from 1828 and 'catherine' is the answer and is case insensitive
Story #3 Hint:
Daniel Bussard corresponded with Jean-Guillaume Hyde de Neuville at the French embassy
Story #3 Clue:
Daniel Bussard heritage was French and he owned a brewery
Story #3 Spoiler:
The Correspondence with Jean-Guillaume Hyde de Neuville was in French and it talked about beer and the French spelling is 'biere' which is the 5-letter combination

Our proof reader must have been hitting the sauce. Several people reported a mistake in the story. The name 'Danial' appears in the text when it should be 'Daniel'.

We received a report the buzzer on the 2021 eChallengeCoin was barely audible even after removing the backshell. We tested a few reserve units and were shocked to find they were weaker than when they were originally assembled (which makes no sense).

We know we were forced to make a late hardware change but we tested all units and grouped them as 'good', 'ok', and 'weak' and then reworked the weak ones. (Even our #000 unit is now suffering from the issue.)

There is a workaround. The audio is available on a pad near the bottom of the eChallengeCoin. The output is a microphone level signal. We have added a video showing the audio connection.

A birdie told me, if you get a 2021 eChallengeCoin and attend DEF CON 29 (DC29) in person, you may find it helpful to take your puzzle with you ... just saying.