The 2022 eChallengeCoin will be available sometime between May and July!

So get ready to take on the interactive challenges and the story of Sara and The Nightclub Riddler. See if you can spot any clues in the photos below! 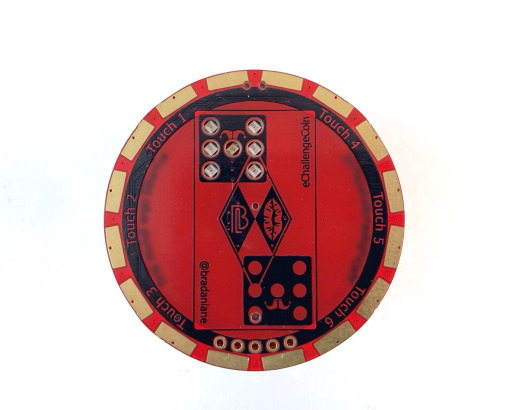 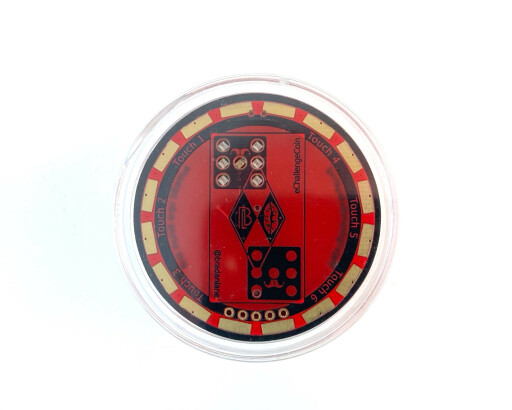 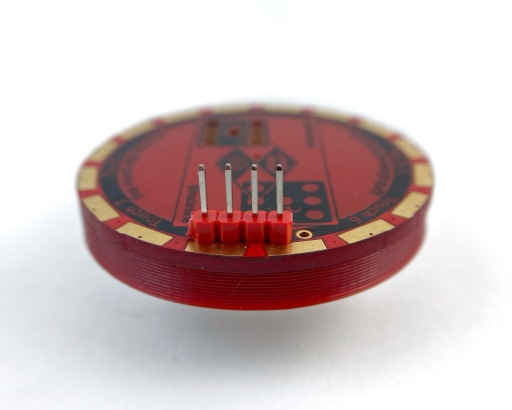 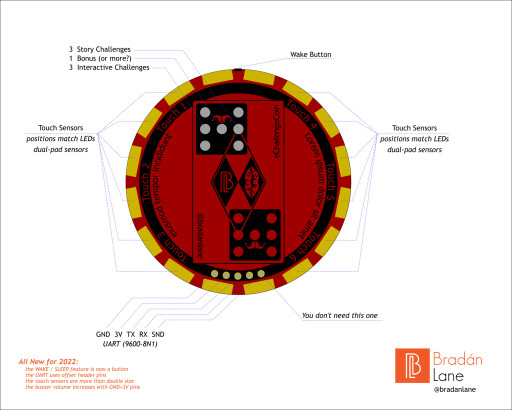 The new eChallengeCoin has six touch sensors and seven LEDs. The touch sensors are now more than twice the size of previous eChallengeCoins - each touch sensor is actually a pair of pads. This should help fit normal sized fingers! The buzzer has two volume levels - it's soft when powered by the battery and loud when connected with the 3V pin. The WAKE / SLEEP feature is now a push button on the top edge and the IR transceiver is on the side of the button. To activate the bonus you point the edge of your eChallengeCoin at another! The UART interface is now a staggard pin header with standard 0.1" spacing. The staggard design eliminates the need to solder pins.

The 2022 eChallengeCoin continues the tradition with the same 44mm diameter and 6mm thickness. The UART uses the GND, 3V, TX, and RX pins. (see the diagram for the layout or remove the backshell to see the printing on the PCB) It is set for 9600-8N1. It only outputs line-feed so you may need to configured your terminal to add the carriage-return. The puzzle may be powered using the 3V and GND pads. It will tolerate up to 3.3V.

Some of the interactive puzzles have a long clue. If you already know the clue and just want to skip to providing the answer, you may use the wake button as previously described or you may touch all of the touch sensors together. You will know the eChallengeCoin has detected this when all of the LEDs are illuminated. Once you release all of the touch pads, the LEDs will go out and the eChallengeCoin will be ready for you to answer the clue.

When the eChallengeCoin wakes, it will show the current status. The status includes which interactive challenges have been solved, which story challenges have been solved, and if the bonus has been achieved. A solid LED means a challenge is completed and the next challenge is shown with a blinking LED. Touching any sensor will leave status mode and begin the next unfinished challenge. The eChallengeCoin will go to sleep after a challenge has been completed or failed. It will also go to sleep if idle for 60 seconds. The idle time is extended to 5 minutes when in story mode.

The 2022 eChallengeCoin has another story from the series the Adventures of Sara Cladlow. Within each story, you are tasked with solving the challenges Sara encounters. The story is accessed through the UART connection on the eChallengeCoin.

The hardware is finished. The software testing has entered it final phase. The grand plan is to make the 2022 eChallengeCoin available in June on the Tindie store and if the virus gods permit it, they (the eChallengeCoins, not the gods) will be available at DEF CON 30!

The 2021 eChallengeCoin buzzer was not very loud. For 2022 the buzzer is still not very loud but if you power the eChallengeCoin with the GND and 3V pins of the UART connection, it now gets much louder. Is it perfect? No. But it's better and we continue to experiment with new solutions.

Another significant design change is the UART connection. You no longer need clips around the edge. There is now a standard pin header along the bottom. The pins are staggard which should allow the use of 0.1" pins without the need for solder.